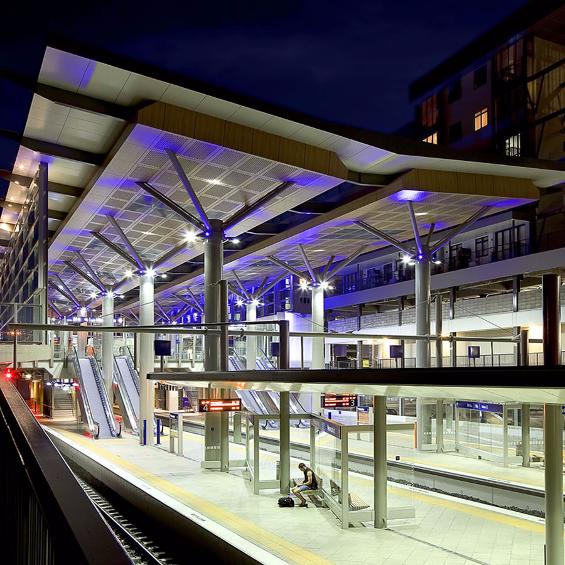 The Newmarket Rail Station redevelopment involved the construction of a contemporary urban railway station and adding a third track, while maintaining the operation of the existing  rail corridor.

It was a complex project involving many stakeholders, in a constrained urban environment, with limited access, tight budget and timing demands, and the need to maintain uninterrupted train services.

The design responds to its linear urban site with a floating linear roof element that shelters the concourse and platform spaces and glazed semi-permeable "wind screen" walls  provide a sense of enclosure and protection from the prevailing wind and rain.

The concourse is an open light and airy environment that is the focal space of the station. Two sets of escalators, stairs and accessible lifts to serve each of the two platforms below. The concourse which contains the ticketing booth, public and staff amenities is linked to Remuera Road to the south by a generous covered link bridge and to Broadway to the west via a generous public square, part of an adjacent residential development.

Strategically located on the edge of Newmarket’s retail heart, and within 10 minutes walk of the bulk of the precincts residential population, the new  Newmarket Railway Station forms a key part in the upgrade of Auckland’s public transport infrastructure.

The site, bounded by high rise apartment buildings and rail over bridges, is an elongated node on the main trunk rail corridor, and forms the fulcrum that connects Auckland’s metropolitan west and south to its city’s CBD.

The client required landmark railway station that was clearly identifiable and would integrate positively with the local context whilst accommodating future operational requirements (such as electrification) and long term passenger growth.

A cost effective, low maintenance, sustainable and highly durable building was required, that would provide a spacious, legible, secure, sheltered and comfortable environment for both staff and public.

The design response to the client brief, the constraints of the compressed linear site, the dynamic pedestrian flows and transitory nature of the commuter travel experience.

With a scale and presence that alludes to the era of grand railway halls, the design is a celebration of movement and circulation, a transparent light filled response to the dynamics of travel.

Central to the design is the simple elongated floating roof canopy.  Supported on a rigorous tree-like structure, the canopy echoes and reinforces the form of the rail corridor over which it floats, while proving a momentary place of shelter and pause.

As the canopy maintains its constant elevation above, the concourse and platform levels cascade and overlap below, creating a variety of spaces and places to arrive, wait, sit, stand, meet, greet, watch, be watched  and depart.

The spaces are vibrant yet calm, generous but not overpowering, open yet contained, coherent and understandable.

"This station provides a contemporary, safe and aesthetically pleasing environment for customers to enjoy train travel with ease and style...... the new station is a stark contrast to the facilities the thousands of people visiting Newmarket had to previously endure...this is truly a station for the 21st century" Fergus Gammie ARTA Chief Executive

“A railway system without good stations won’t go far, and Auckland’s addressing of this issue has resulted in a high-quality redevelopment. On a technically demanding site, the Architects have skillfully handled the programme to produce an urban room that uplifts the journey for the city’s rail users. Their experience of the station is further enhanced by the design’s timely integration to a newly formed public square. Visually permeable, generous with linkages, and boldly procaliming is presence with vivid signage, the project is a key lement in the developing public transport infrastructure of Auckland”

Designed in association with HMA and Opus